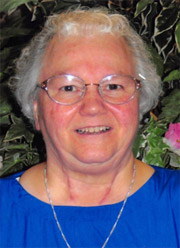 Sister Jacqueline Kirouac was born in Manchester NH on March 14, 1939. She was the only daughter of her parents six children. She entered the Sisters of Holy Cross in 1957 at the age of 18. She pronounced her final vows in 1964.

Sr. Jackie earned a BA degree at Notre Dame College in Manchester, NH. She taught at parochial elementary schools for many years in Massachusetts in New Bedford and Westport. She taught in New Hampshire schools in Manchester and Derry as well. She was also a coach and an administrative assistant at Trinity High School in Manchester for 14 years.

Sr. Jackie later worked in the Catholic School Department for the Diocese of Manchester for 10 years. In her later years she served the community in Manchester at St. George Manor and the Holy Cross Health Center for six years.

On Wednesday, June 8th 2022, Sr. Jackie K. as she was known to all took the hand of the angel that called her name. May she Rest in Peace. 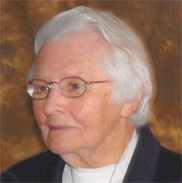 Sister Georgette was the recipient of the Professor Emeritus Award and the Alumna of the Year from Notre Dame College. After leaving the College she was Director of Transportation at St. George Manor and retired to the Manor in 2008 and moved to Holy Cross Health Center in 2016.

One of her many great accomplishments was establishing a Holy Cross Scholarship Fund.

Sr. Louise Tarpey was born in New Bedford, MA on March 15, 1928. She entered the Congregation of the Sisters of Holy Cross in 1946 and pronounced her final vows in 1953.

Sr. Louise was an elementary school teacher in NH and MA. Along with teaching Kindergarten at St. Leo’s in Gonic, she became church organist and music teacher. In 1974 the community recognized Sr. Louise’s Gift of Servant Leadership. From 1974 to 1993 she was named superior in six NH convents where her kindness and gentleness were experienced by many.

After her retirement she volunteered at the Elliot Hospital knitting hats for newborn and premature babies, among other services and wherever else a need arose. Sr. Louise will be long remembered for her quiet presence and contagious smile.