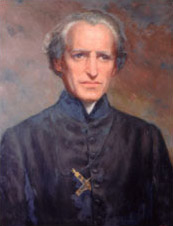 Basile Antoine-Marie Moreau, born at Laigne-en-Belin, near Le Mans, France, on February 11, 1799, founded the Congregation of Holy Cross. Basile Moreau saw a visible image of the Holy Family in this Congregation of Holy Cross which he had conceived as an Association of religious men and women working together on equal footing for the building of the reign of God. He intended that this Congregation, composed at its origins of three distinct Societies, namely, Sisters, Priests, and Brothers, be an apostolic institute. As Father Moreau stated in one of his letters, he envisioned that: "Holy Cross will grow like a mighty tree and constantly shoot forth new limbs and new branches which will be nourished by the same sap and endowed with the same life."

To obtain a favor through the intersession of Blessed Father Moreau

Lord Jesus,
Source of all that is good,
you inspired Basile Moreau
to found the religious Family of Holy Cross
to continue your mission among the People of God.

May he be for us a model of the apostolic life,
an example of fidelity,
and an inspiration as we strive to be followers of Jesus.
May the Church be moved to proclaim his saintliness
for the good of all people.

Lord Jesus, you said:
“Ask and you shall receive.”
I come to you to ask that you hear my prayer.
It is through the intercession of Venerable Father Basile Moreau
that I ask …

May I learn to imitate his holiness and service
and look to him confidently
in times of need.
Amen.